And a couple hours later...


And a couple more hours later...

I decided to go to 7-11 on my lunch break today. It was going to be like an adventure. I bundled up in all my warm clothes and headed out.

When I left it was -19°C. Normally at that temperature my clothes should have kept me warm, but the wind was absolutely fierce. It was blowing from the east at 70 kph and it had no trouble penetrating anything I was wearing (I didn't know it at the time, but the weather network was reporting a windchill of -36°C.) When I got to the corner and headed north I thought I'd be in the shelter of a long row of three storey apartment buildings, but I was wrong. The wind was swirling around in one big snow-eddie and each snowflake stung as it hit my cheeks.

When I got to 8th St I knew the 7-11 was close. I just needed to cross the street and a parking lot... but despite that I couldn't even see the building. Even though traffic was light, I was extra cautious as I crossed the street because my coat is white, and by now I had snow caked all over me, so my toque, mitts, scarf and jeans where all white as well. I like to joke that I am the size of a female Sasquatch, well, today I really did look like an abomidable snowwoman.

By the time I got inside the store my eyelids were freezing shut and the tiny slit of exposed skin between my scarf and toque felt like it was frozen. I warmed up for a couple minutes as I bought myself a diet coke, and then I headed back out. Going home was easier, because the wind wasn't straight into my face, but the snow was still blowing hard and just as deep (overall, the snow is a foot deep everywhere, except where drifts have formed, and there it was sometimes over two feet deep). In fact the snow was blowing around so much, the footprints I made on the way there were already gone.

By the time I got home I was out of breath. I felt like I had been running on my treadmill instead of walking. It took me 37 minutes to walk a total of 4 blocks. It was worth it though just for the experience of being out in this blizzard, and of course for the diet coke.


Here are some stills from my balcony: 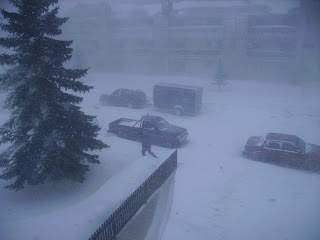 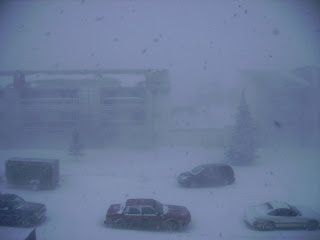 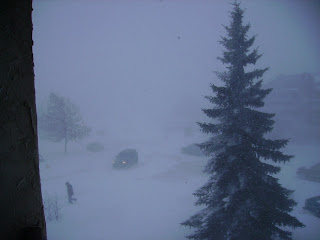 (can you see the church on the corner?) 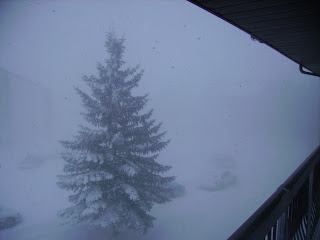 (there is another apartment building across the street, can you see it?)