I drove out to the farm this weekend. Sometimes I feel nostalgic going out there because so much about the area has changed since I was a kid. Buildings have deteriorated and have been abandoned or replaced. People have either moved away or passed away. Even some of the trees have changed to a dramatic extent from the tornado 20 years ago. Some of the towns themselves are disappearing. You can still find Waitville, SK on Google Maps, but the population of that town is zero. I like to imagine what it was like when more people were around, when towns like this were bustling with activity. I try to put myself in the place of the people that lived in one of these towns during it's prime, having to watch it slowly dry up year after year. I would have thought they feel very melancholy at times. After driving through Crystal Springs I realized that not everyone feels the same gloomy, lonely, nostalgic feelings as me.
The speed limit abruptly dropped to 50 km/h from 90, but I wasn't going that f 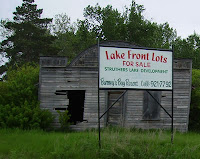 ast as it was. The road was so poor that even 90 would have been dangerous. The slower speed allowed me to take a closer look at the town. The first building was the grey colour of wood that has long had the paint eroded from it. I imagined it was a store of some kind, as it had a facade front. It was tilting slightly, and one window was boarded up. The other window was just a hole, with obvious damage around it. One could walk right inside, but I didn't think anyone had been in ages.

s looked to be in similar states. I noted some had cars parked next to them that didn't look as if they had moved in a decade or two either. Then I came across The Crystal Springs hotel, but it no longer had a sign up anymore identifying it as a hotel. I was wondering if it too was closed. I remember as a kid my grandpa would go there to play pool and have a few beers with his friends. This time though, no cars were parked in front. Right next door was what looked to be a garage, but it too was vacant and had been for years. The two places that would probably be the busiest in a small town were both looking very dead. I guess there just isn't enough customers anymore.

The church was the next building I noted. I figure god still had a few customers, but 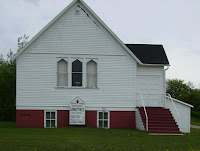 not today. It looked better kept than that other buildings, but again no cars were parked in front. My window was down and the only sounds were the birds, the breeze, and my car. It was kind of creepy. It only takes a minute to drive down the main road, so it isn't a big place but in that minute I didn't see anyone at all. No current signs of life, just evidence that people had been there once. Granted I didn't see it all. The town extended beyond the road I was on, but from what I could see, this was a ghost town. I smiled to myself that the church was empty because there wasn't a soul left in town.

I found myself feeling sad again, for this town that seems to lose life with each passing year. The town is literally losing lives. Like my grandpa who died recently, the inhabitants of this town likely have already passed on, or it won't be long. My heart went out again, not just for the people who see their town disappearing, but also because the town itself, their home, is a reminder of all the people that are no longer with them.

I came to the last house in town. At first glance I would have guessed it was also unoccupied. The paint was flaking off all over, the grass wasn't mowed, and the front step was being taken over by the tree behind it. This house was a little different from the others. It had curtains, and little knick-knacks in the window. There was a big antenna on the roof, and I could see there was some kind of backyard. I imagined this house was occupied, just that most of the traffic in and out and other signs of life took place on the side I could not see. I didn't feel bad for this person, living in this dried up town, because no matter how many people were already gone, it wasn't enough. In a town that seemed devoid of life, this guy still felt the need to give everyone an extra incentive to go away, for his door was clearly labelled with a 'No Trespassing' sign. 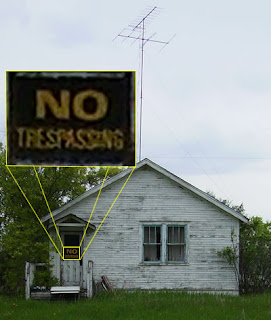 This place you describing sounds like Iron Forge. Everything looks old. All the people you know either transfer or quit :( .