Yesterday was yet another Monday. On one hand I look forward to them because I usually go to Jenna's house to watch Heroes. On the other hand I dread Mondays - I have to go back to work, and I am always tired. I usually stay up too late on the weekend, so by the time Sunday night arrives I can't sleep until around 2 or 3:00am, making Monday a very long day. I normally go to bed quite early in order to make up some sleep, but last night I fought off sleepiness and watched The Bourne Ultimatum instead.

This morning my alarm went off as usual, but I slept right through it. When my Backup Alarm rang I woke up, but I assumed it was my first alarm, so I shut it off. When the Last Chance Alarm finally woke me up I couldn't believe how late it was. I struggled out of bed and into the shower. I was so tired I pretty much stood there under the water with my eyes closed. In terms of washing up, one could say I did the bare minimum. (get it?)

If there was ever a morning I needed coffee, it was this morning. There was a time when my favorite part o 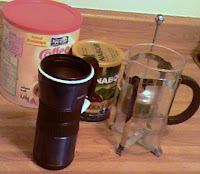 f drinking coffee was drinking out of a fantastic travel mug, but nowadays I have a deep appreciation for the drink as well. I don't know if it is all due to caffeine or if it is part psychological, but it really does wake me up in the morning. Some mornings if I don't drink coffee I find it very difficult to work. Without coffee this morning I'd be asleep at my desk in no time.

I walked like a zombie to the kitchen and I pulled out the coffee press and my favorite mug. I took the coffee grounds and the coffee-mate from the cupboard and put the appropriate amounts in each vessel. I boiled water and added it to the carafe and 5 minutes later I filled my mug and sat down at the computer to work.

I let the coffee sit for a few minutes to cool down, and then I picked up the mug, 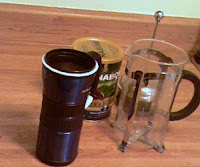 closed my eyes and took a healthy sip. Imagine my shock when I realized my mouth was full of grit. It is amazing how quickly coffee turns into 'water with coffee grounds floating in it'. In that instant I couldn't even recognize what had happened, and I messily tried to quickly spit the coffee back through the little sip-hole in the travel mug. I went back to the kitchen to wash some spilled grounds off my thumb and I realized what the problem was. Normally I put coffee grounds in the press, then I put coffee-mate in the mug. Apparently this morning I was so sleepy that I put coffee grounds in BOTH. Yeah, there's a catch-22 when you need coffee in order to make coffee.


Thanks to Debbie for the ending!

i'm glad you're doing reasonably well. i hate mornings and right now that i'm a student, i'm grateful that three days a week i can sleep in. on the days that i have to be up by 9 at the latest (foregoing a shower), i can come home and nap after class. getting up for work each morning is going to suck something pretty icky.

Glad you are back. Missed ya!