This article describes the events of the first night I spent in my new apartment.

I didn't think much of this apartment when I moved here. I didn't really look around because after finding out from my landlady that Warren gave his notice without telling me, to having issues with him during the move-out, to finding a new roommate only to have him give notice because of evil spirits, to finding out my apartment was for sale, I was really sick of apartment related drama. When my landlady mentioned a place nearby that was available, I took it on the spot. It just seemed best to sign the papers and get on with life. Now that I've been here for a few months the place has grown on me, but at first I was beginning to regret not spending more time looking for a better place to live.


Perhaps if I did spend more time on the decision I wouldn't have overlooked a few problems with the layout of the building in relation to the building next door. The two buildings are oriented perpendicular to each other, and the entrance to the building nextdoor is directly opposite my bedroom window. The space between buildings isn't even large. There is enough room for a narrow roadway, and line of angled parking stalls. I don't know how many feet that amounts to, but it certainly isn't enough to prevent me from hearing every sound as people come and go through that entrance. I know now that this isn't usually a problem, but that first night my proximity to that door stressed me right out.

It was pretty late at night when she woke me up. It was a girl named Angela who appeared to be extremely drunk. I didn't know her name was Angela yet though. She was stumbling around and crying and yelling "LET ME IN!" over and over again. Every second or so she'd interrupt her mantra with a few sobs, so overall she was repeating, "Boo LET hoo ME hoo IN hoo hoo hoo!!!" When she'd pause to take a breather from all the sobbing she would grab the handle and rattle the door, as if in her drunken state she thought she could pull apart the locking mechanism.

This new bedroom window was twice as big as my old bedroom window and my curtains were far too small. All I had to do was sit up in bed and I could look through the window and see her stumbling around, barely able to walk. I didn't feel comfortable in my own bedroom. I felt exposed, and I felt like I didn't belong here yet. I just wished someone would do something, and suddenly someone yelled "Shut the fuck up!" I peeked out the window and saw Sobbing/Yelling Girl give up on getting inside the building and she walked away.


I fell asleep, so I don't know how long she was gone, but some time later I woke with a start to a resounding round of sobs plus a deafening cry of "LET ME IN!!!" Sobbing/Yelling Girl was back and she seemed just as drunk and just as upset as before. I looked out the window at her and this time she was dragging a bike behind her. It looked like it would have fit a ten year old. I assumed she stole it. Sobbing/Yelling/Thief Girl walked up to the door and I heard something new: I heard her actually buzz the apartment. It struck me as incredible that the entire time she was trying to get in before she hadn't buzzed the door even once. I guess she figured the sobs, door-rattling, and yelling would have been loud enough. I am really surprised it wasn't.


The buzzing clearly did the trick because I saw a light turn on in the window of that building's apartment #1. That window is a lot closer to all the sobbing and crying than my window is, yet it didn't seem to wake any of them up. The door-buzzer sounded, indicating to me that the occupants were now buzzing her in. I sat up to see Sobbing/Yelling/Thief Girl pull the door open and try to pull the bike inside with her. Try as she might, that darn bike was just not fitting, and after a minute or so of banging it around a guy with a mohawk-braided-ponytail came out to help her bring it in.


You are probably wondering what a mohawk-braided-ponytail is. Well, imagine someone with a hairstyle that is a cross between this: 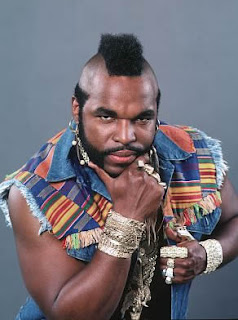 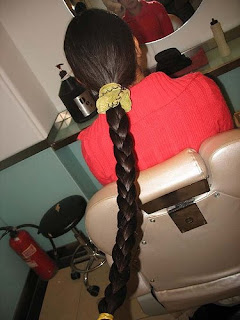 I watched them through the glass of the entrance door. They went down the stairs and made a right turn into apartment #1. Then I switched my view to the window. It has blinds on it, and they were closed, so I couldn't see anything. The window was open though, so I could sort of hear what was going on. I heard quiet, calm, concerned sounding murmurings followed by hysterical sobs. It appeared to me that the occupants of #1 were trying to ascertain what had happened to the Sobbing/Yelling/Thief Girl. I decided the show was over. I checked the clock to see it was 3am, and so I went laid back down and tried to fall asleep.

Shortly afterwards I heard the entrance door to the next building slam open. Yes, it was opened with such force that it made a huge bang when it could open no further. It startled me so much I sat upright in bed, not because I wanted to see what was happening through the window, but because in my half-asleep state I was ready to fight off attackers. I quickly realized what was going on though and I looked out the window to see a shirtless Mohawk-Braided-Ponytail Guy running full force down the parking lot in his bare feet. He got to the end of the lot and veered left.

Where Mohawk-Braided-Ponytail Guy was running at top barefoot speed, Sobbing/Yelling/Thief Girl was barely managing a stagger. It took her a good ten minutes to cover the distance he covered in one. After she was long gone two more girls came out of the apartment. Unlike Mohawk-Braided-Ponytail Guy they were not shirtless. I assumed they must have wanted to stop Sobbing/Yelling/Thief Girl from leaving, but decided to do their hair and makeup first.

When they came out they started yelling "ANGELA!! WHERE ARE YOU?!?!" from the entrance door. They continued to yell for a few more minutes, and then they formulated a plan. I heard one of them say "You go that way, I'll go this way." Then I watched them both head off in the same direction yelling "AANNGGEELLAA! WHERE ARE YOU!?!?". Unfortunately Angela had staggered off in the opposite direction fifteen minutes earlier.

I don't know what happened next. I fell asleep. When I woke up later it was a little after 4am and the sun was coming up. I didn't wake up because of the sun though. I woke up because of Mohawk-Braided-Ponytail Guy. Now he was outside staggering around, but not because he was drunk. It looked like he had the shit beat out of him.

You are probably wondering how a guy staggering around outside could possibly have woken me up. The answer is simple. If you run off to get revenge and don't take the time to put on a shirt or your shoes... well, you probably don't bother to grab your keys either. BeatenUp-Mohawk-Braided-Ponytail Guy was now rattling the door handle and yelling "LET ME IN!!!! GIRLS!!! WHERE ARE YOU??!?"

well, that must've been quite exciting. i hope life has gotten to be somewhat more settled and quiet for you.

I haven't written part II yet...

It was worth reading for the picture of Mr. T. Nice.

Great I just sent the Birthday card to the wrong address :-(

And I think I spelled SarÅh the wrong way on the card too...

Next time you move could you consider Sweden as a possible place to move :-) I know a nice town with this very nice single man...