On Sunday I got a cockatiel. On Monday I almost killed him.

It is true that I saved his life on Monday too, but I don't think that made either of us feel any better. Joey was over and we were in my bedroom watching a show about ghosts. I actually think both of us were sleeping for the most part. Behind us on the dresser Baby was in his cage.

Baby's cage has a big front door that is secured by a metal rod. You drop it down through a couple of eyelets and the door can't open. I had been leaving the door unlocked though because I liked to open the door to see him better. I wasn't too worried about it because the door is stiff, and I didn't think Baby could open it. It turns out I was wrong.

It scared the shit out of me when I heard the sound of Baby flying around my bedroom. Not only was he was squawking but his wings make a surprising amount of noise. He didn't fly far. He landed on the curtain rod and hung out up there for a while. In the meantime I closed the bedroom door so he couldn't escape further into the apartment.

Baby stayed up there for like three hours. Joanne had gone home and it was just Baby and I in the apartment. Over all these hours, between the closed door, my body heat, and my computer, my room was getting quite warm. I decided that I really needed to open that door and get some circulation going. I didn't think it would hurt if Baby flew around the apartment either, but before I left the door open, I turned on all the lights in the apartment so he could see where he might be flying.

About half an hour later Baby took flight. He made three or four tentative flights at the door, each time turning around and retreating to the curtain rod. Finally he got the courage to go exploring.

I followed him out. He flew down the hallway and landed on a bookshelf. I sat down on the couch and read my cockatiel book. Baby didn't explore any further though, he was just content to hang out on the bookshelf. After forty-five minutes I decided it was bedtime and I tried to pick him up.

I had been trying to get him used to my hand earlier that day by putting my hand in his cage for a while. He was scared of it, and never let it get closer than 10 centimetres, so needless to say I had never tried to pick Baby up before. When my hands closed in on him to pick him up, he panicked. He took off and started shrieking and flew around me in circles. He landed on a different bookshelf, then he landed on the top of the blinds, then back to the second bookshelf again. I was getting worried because I had no idea how to catch this bird. I was afraid to try a fast grab, because I was scared of hurting him. The same goes for when he was flapping his fragile little wings all over. It was apparent that he wasn't going to sit still for me to carefully pick him up.

I tried the slow-as-can-be technique. My hands inched closer and closer in slo-mo, but with each second you could see Baby getting more and more worried. Suddenly he took flight and started flying towards a lamp in the corner.

I have one of those older halogen floor lamps. You know the ones that are considered a fire hazard? The ones that have an 8000 watt bulb in it that burns at just under the temperature of the sun? This is the lamp I call The Moth Killer because in the summer when a moth gets inside the apartment I freak out. I hate trying to kill them, so I just turn on the lamp. The moth is invariably attracted to the brightness and when it flies over top, it is so hot the moth drops dead instantly. This is the lamp Baby was flying towards.

I could tell by his posture that he was going to perch on this lamp. In the split second I made this realization I imagined him getting horribly burned feet at best, and actually catching fire at worst. I've seen a moth erupt into flame before, I didn't think Baby's fine feathers had much chance. I didn't know what else to do, so I grabbed at him in mid-flight.

I ended up pulling several of his tail feathers right out, and Baby fell to the ground. It looked awful because he was still flapping when he crashed, and I just imagined broken bones. I felt so ill over what just happened I felt like I could throw up right then, but I still had to get Baby to safety.

I managed to pick him up and he bit me SO HARD I had blood dripping off my finger from where both the top and bottom part of his beak had me. I couldn't take it, so I put him on the ground temporarily, pulled my finger from his mouth and repositioned my hands. He ended up biting me in a different place and drawing blood there too, all the while despite clamping down on my fingers he was shrieking incredibly loud.

I got him back into his cage and I was relieved to see him climbing around without seeming to have any injuries, but he was not the same. He wasn't playing, it seemed like he was sulking. If I even got near his cage he'd hiss at me and extend his head as far as he could towards me while holding his beak open, ready to strike.

I felt so terrible that almost let my new little friend get burned up that saving him from it was no consolation at all. As I write this five days later and he seems to be getting better, but he still wants to bite me if I get too close. It is a good thing I've got 20 more years to get him used to me again, but I sure hope it takes less time than that. All I know is that when I moved at the end of the month I'm 'giving' that lamp to my roommate.

After a nice supper of peas (you may notice them all over his face) I let Baby fly around my room today. I don't even try to put him back in his cage, he takes care of that all on his own. I think he had a great day with me tonight, and he even got adventurous and stood right on my keyboard as I was writing blogs. So if there are any typos... blame him. 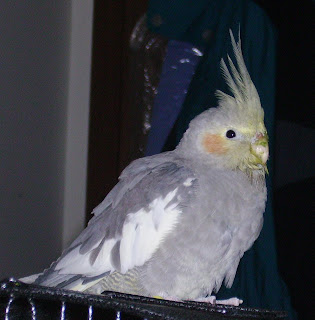 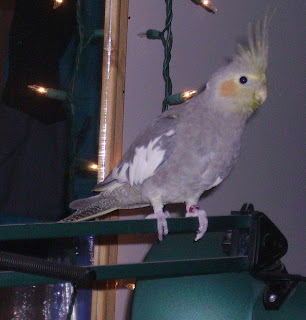 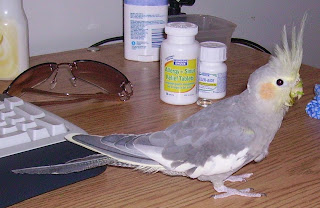