On day 1 Baby wasn't most tame bird I've ever seen, but I think after knocking her out of the air and pulling out some of her tail feathers on day 2, I became the scariest thing in her world. We've been working on it though, and it has been paying off.

A couple of weeks ago she decided it was safe to eat out of my hand and to accept treats directly from my fingers to her mouth. This is something I do a little bit of every day to strengthen our bond, and it seems to be working. Unfortunately if food isn't involved, I usually don't have a hope of getting my finger within touching distance. It seems she likes to maintain a personal space of about five centimeters, any closer and she gets mad - unless she is curious about what I am doing.

She always needs to be included, especially when I am working. She would love to stand directly on my keyboard, but I seldom let her. All I need to do is put my hand within that five centimeters and she will retreat. At first she'd retreat up to the curtain rod, but now if she can't stand on the keyboard she will land on my head or stand between the keyboard and the edge of the desk and try to reach my necklace. She likes the shiny things. Sometimes she will land on my shoulder and play with my earrings.

As the days go by she has certainly become more and more brave about getting near me, but she still just refuses to let me get near her. A couple days ago I snuck through her defenses when she wasn't looking.

Her cage was on the table beside me as I was working. The door was wide open and she was inside playing with a toy. She was very occupied with it and didn't notice as I reached in behind her and scratched the back of her head. She immediately hung her head and turned it sideways so that she got scratched in the perfect place. I was elated that she was letting me touch her and she seemed to be absolutely loving the scratch... until she realized what was going on. 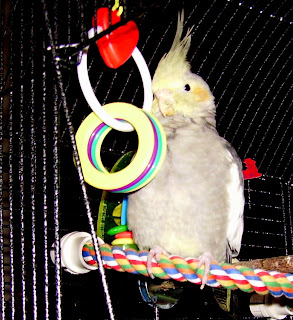 Baby looking cautiously at an approaching finger
She caught a glimpse of my finger and got very angry. In an instant she turned around, slicked back her crest, outstretched her neck and bit me several times until I pulled my finger out of the cage.

A few minutes later she was playing again and all seemed forgotten so I started to put my finger in the cage again. She hadn't forgotten though and as soon as the finger breached the threshold she stopped what she was doing and assumed a cautious pose. I said "Scratch?" and for a few seconds it seemed like she was considering what I was offering against the possible threat. Apparently she decided that the scratch was worth the risk and she stretched out her neck towards me again, but this time she also hung her head and turned it sideways so I could scratch the good spot again.

We did this a few times over the afternoon and it was great. Unfortunately she had a long nap that afternoon and when she woke up she seemed to have forgotten all about trusting the scratching-finger. I can still manage to scratch her from time to time, but I always have to sneak it in when she is really busy playing with something. I don't mind though, it's only been a few days, we have a lot of time left to become best friends. 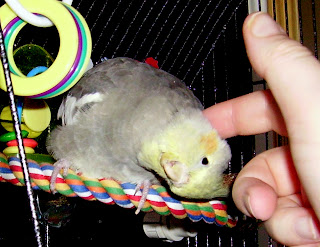 Baby enjoying a good scratch
Posted by Sarah J M at 12:39 AM

Glad to see Baby is coming around!!