When I was a kid I used to stand in the basement and just look at the shelves. They were filled with book after book after book covering a lot of the available wall space. My dad loved science fiction, and he loved science fiction novels. Sometimes he bought two or three books at a time, and many of them he didn't even get a chance to read. He told me once that he'd read them when he retired. Well, he didn't make it that far. He died several years ago, and those books were left unopened. I couldn't help but feel sad and wonder which books he had on his retirement-to-do list. I was pretty sure that high on that list, if not already read, were his Star Trek novels. My dad was a fan.

When VCRs became somewhat reasonably priced in the late 70s or early 80s my dad bought one. It was absolutely huge compared to VCRs these days, but that was OK because so were TVs. That first VCR we owned was part silver and part fake-wood, but all plastic. It was a spring powered top-loader that made you think you'd lose a finger if you were too close when the 'eject' button was pressed. With all this advanced technology, I think the feature Dad used most was the remote. It had only one function - it let you pause while playing or recording. Best of all it was connected to the VCR with a 12 foot wire. With that VCR and the high-tech remote, Dad was no longer collecting Star Trek books - he was collecting Star Trek episodes.

I must have been around 10 or 11 years old when Dad started recording Star Trek off the CBC every weekend. We'd watch it as he recorded it, careful to pause recording during the commercials. I remember a few times he'd entrust me to man the remote, and more than once or twice he'd try to hide his disappointment when he realized I had paused it for the commercials, but forgot to unpause it when they were over. He was never upset about it though, because he knew it would be on again in the future.

As the time went by and we got more cable channels Star Trek seemed to be on more frequently until eventually Dad had every episode, mostly in order, with commericals edited out. During that time, my sister and I (and even my mom - although probably reluctantly) watched a lot of Star Trek.

When the newer Star Trek series came out like The Next Generation or Deep Space Nine, and Voyager, Dad recorded them too. Soon he had to put up more shelves in the basement to hold all the VHS tapes.

He told me that despite the newer special effects in the new episodes, he still preferred the original series. He said that the characters of Kirk, Spock, and Bones made the show for him. He loved their personalities, interactions and relationships. I always preferred that series as well, in no small part due to the fact that I saw most of them with my dad. 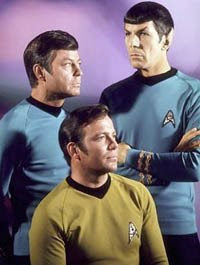 When I found out they were making a new Star Trek movie, I was excited. I was even more excited to hear that they were bringing back the original crew, my dad's favorites. Some people were upset that they were using younger actors to play these iconic roles , but I didn't care. Afterall, my dad said it was the characters that made the show great, and I think he was right. My excitement over the new movie was tempered though. I couldn't help thinking that Dad would have loved to have been around to see it, and I would have gone with him.

That got me thinking. I still remember the day he took me to the first Star Trek movie, and I still remember the solemn look on his face when Spock died in The Wrath of Khan (I cried, by the way). It just didn't feel right to me, to go see this movie without him. It just seemed like something I should be doing with my dad, so I had an idea.

I asked my family; Mom, Jenn and her husband Nick, and of course Heather to save May 8th for me so that we could all go see this movie together. I picked up the tickets last week, and I got one extra. When we chose our seats in the theatre, we left an empty one in the middle of our group. I like to think that is where Dad would have sat if he could have made it. Dad would have loved that movie if he had been there, I know I did. Even better, it just felt special to me, having bought him a seat and surrounding it with his loved ones.

I wish you had been there Dad, it was a good time. We all thought about you and missed you. 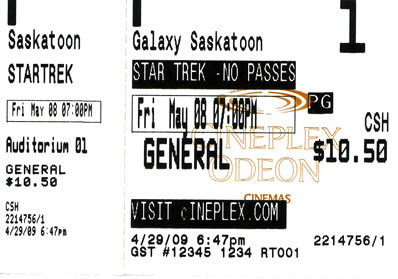 P.S. Thanks to Heather, Mom, Nick and Jenn for adhering to my strict timetable, seat preferences and seating plan. It was perfect.
Posted by Sarah J M at 1:25 AM

I remember having one of those fancy dangled wired remote controlled vcr's lol.
Very touching story Sarah, I only wish I had memories of my dad that I could look back on and be happy about.

Sarah that was beautifully written! I am sure your Dad was there in spirit. BTW, even though you are MUCH older than me, I too remember those old VCRs, lol.

I very much enjoyed this post a lot as it brought back a lot of memories from when I used to watch Star Trek when I was a kid and I think I had that same VCR! We didn't even own ours we rented it! Anyway, your post almost made me cry, thank you for sharing it.