Thursday night I was out with Megan. We parked my car over at the Mendel Art Gallery, and then walked to the Broadway Cafe where we had an excellent supper, then we walked back. Along the way we stopped to take a look at a couple of churches. When we finally got to my car Megan said "ooooh... Sarah..." and I looked over and saw that my window had been smashed. I took a look under the seat and saw lots of pieces of broken glass where my purse should have been. I was pretty quiet after that. I'd never directly been the victim of a robbery before. Now I'm an old hat though because little did I know that this was only the first break-in in a matching set.

I took Megan home and went to the police station where the attitude was a friendly 'oh well'. I don't blame them though, there really is nothing to investigate. The policeman was nice and sincere and looked honestly sorry it had happened. He took my statement as to what was stolen. All tolled my initial purchase prices added up to about $20 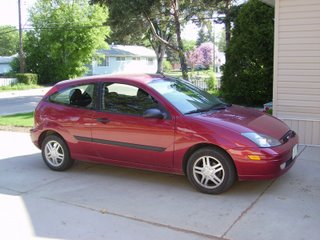 0. Of course it was all used so there is no way the thief would get that much. I estimate that maybe the thief would get $30 tops. I left the police station feeling like the cop had seemed almost more upset over the incident than I was, and he wasn't the only one. When I got to my car where there was a man kneeling before an upset 3 or 4 year old boy. The boy's face was all red and wet looking and he was pointing over his dad's shoulder at my car and fighting back sobs he said "It's bwo-o-o-ken... it's bwo-o-ken..." Now that boy was really feeling bad for me.

I went to my mom's house to plug the hole in my car. I used the carbboard from a box that once contained an Ab Lounger, which of course my mom bought from the Shopping Channel. I cut that cardboard so it fit my window perfectly, and I'm pretty sure my duct-taping was water-tight. I was proud of the job I had done. Considering it was cardboard, it was quite attractive. In fact as I drove along I noticed people staring at it intently. It wasn't until later I realized they were not admiring it - they were reading it. The side of my car now featured writing that urged readers to get 30 minutes of physical activity 3 times a week. 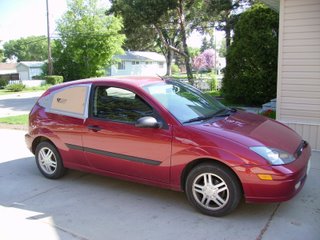 That night I left my car in my parking spot, but not before making sure it was completely empty of anything of value. That makes sense right? If someone has already broken into your car and stolen the most valuable stuff, then you will likely remove everything left behind because your car is even more vulnerable with a broken window. It makes perfect sense to me... but apparently not to robber #2.

Some time in the night some highly intelligent individual must have realized the cardboard on my window was covering up a hole, so he peeled back my duct-tapestry and stole whatever he could reach. Unfortunately for him the only thing left in my car was a little plastic Safeway bag that I was using to hold garbage. Yes, this clever guy broke into my car to steal from me, but just ended up taking out my trash.
Posted by Sarah J M at 6:19 PM

One can only assume the second thief was just taking the advice and getting his 30 minutes of physical activity. I suppose he jogged to the nearest refuse dump location.

Getting garbage from a break in.....