As you know, I have been parking across the river to save money on parking. I am glad for the exercise, but I hate crossing the bridge because I always feel so self-conscious. I don't know what it is, maybe it has something to do with temperature, or the fact there are no obstructions, but as soon as you get over water the wind seems to increase exponentially. As a result, as soon as I step on to the bridge, my hair blows back revealing my tragically male skull shape.

I shouldn't complain because given the age I began my transition, I haven't been too cursed with overly masculine features, but let's face it - most of my transition success is due to women's clothing, jewelery, makeup and a feminine hair style. If you get me out of my clothes, the illusion quickly fades - and that is one of the reasons why I am always clothed in the presence of others (the other reason is that I can't seem to get a date these days.)

Hair is like clothes for the skull. As a transsexual I use hair in exactly the same two very important ways that I use clothes. The first way is that I keep it feminine to help present a feminine appearance, and the second way is that I use it to hide my non-feminine features. The problem with hair that I don't have with clothes, is that it doesn't take much of a wind to blow my hair into a position where it stops hiding my flaws.

Unfortunately for me, our species has significant amount of what is called sexual dimorphism. This means that males and females, although the same species, have differences in form and appearance. If men and women were only roughly the same shape and size, life would be a lot easier for us transsexuals, but clearly there are substantial differences. 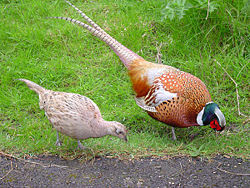 The easiest differences to spot of course, include the fact that women have pronounced breasts and hips, and that typically women are smaller than men. Some differences that are harder to notice on anything but a subconscious level involve the skull. Men have a pronounced brow ridge - similar but not as emphasized as the kind you see in gorillas or cavemen (female readers: you can probably extend further comparisons along these lines if you like). Further, a male skull is somewhat dome-shaped above this ridge, where a female skull is typically a continuous curve from the eyes to the top of the skull.

Differences between male and female skulls

Compared to a woman's skull, men also have a broader chin, as well as a more defined angle where the chin approaches the ear. We may not notice these differences, but we use them all the time to differentiate between male and female. It is exactly these differences that make me feel self-conscious when I don't have hair hiding the sharply-angled and misshapenly-masculine bits of my skull.

Again, I don't want to be a whiner. I think I am pretty lucky facially in the pass-for-female department. On cursory examination I seem to have somewhat soft, feminine facial features, but when my hair is blown back, it reveals the true male nature of my boy-skull. Any appearance of feminine softness is replaced with craggy, hard looking angles along my forehead, and along the sides of my chin and any illusion of femaleness disappears as surely as if I had just taken off all my clothes and let my wiener hang out.

I will illustrate this using... illustrations. You can see in the first image below how I look with hair framing my face (and sunlight reflecting off my pudgy cheeks). Considering I'm male I think I pass alright as a woman. In the second picture though you see what I look like when my hair is blown back. It is hardly feminine, in fact, it is down-right scary. 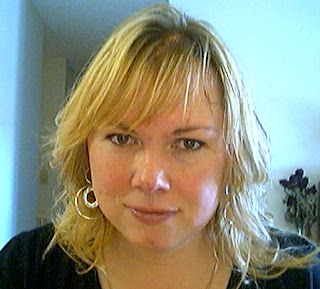 Sarah with her hair allowed to frame her face 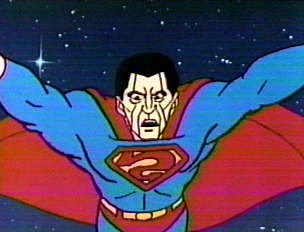 Sarah with her hair blowing back in the wind
Posted by Sarah J M at 8:15 PM

Sarah you can't be Superman! Only Superwoman! Because you are very girly! You are a very pretty girl, don't be so self-conscious.

Not only are you gorgeous you are hilarious. its obvious that as a woman you can leap small oceans without a running start.

on another front you have been given the highest praise from my beloved dykewife after getting through some of your archives she declared that she would date you if she dated.

That is Bizarro, not Superman! There is a big difference.

Actually, since Bizarro is supposed to be the opposite of superman, shouldn't he be a woman anyway?

you are one of the most amazing people i've encountered on the internet in the 12 years i've been doing computer stuff. you're funny, you're sweet, brave and compassionate. you're also cute. it's been an enormous privilege to be allowed to enter your life as a witness to you emerging from your cocoon.

in one entry, you posted pictures of yourself as you were in the 1990s compared to how you looked as you began to live as a woman. you mentioned that you looked younger. funny, i was told that happiness does that to people. :)

one thing i didn't see (not saying it wasn't there, jst didn't see it) was how you came to decide what names you wanted to change to.

Wow, thanks for the compliments guys! I do try to be funny in my blogs, but as for everything else you guys said, you are so so wrong.

The thing is, I just don't write about all the mean nasty things I think about, so all you see is sweet friendly Sarah. If I wrote an article all the times I was angry at something my blog would be ten times longer.

Haha, I am just kidding. You are right, I am great. Thanks for noticing.