My last post mentioned that I had sworn off using bust enhancing devices like lifts, and this is the story explaining why.

In 2005 I went to our work Christmas party that involved a little bit of bowling and a whole lot of booze. Up until this night I had been wearing an Invisi-bra nearly every day. An Invisi-bra is essentially a pair of silicone lifts, but they are connected together with a hook and are coated with a sticky substance that adheres amazingly well to skin. The packaging asserted they were good for any occasion, and to this point I didn't think that maybe drunken bowling wouldn't be an exception. 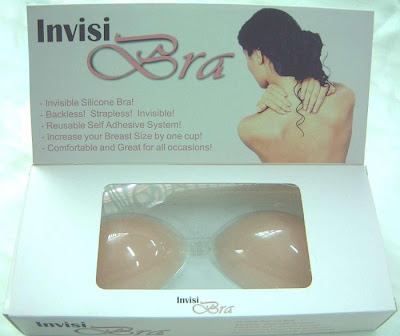 Despite what happened during bowling night, the Invisi-Bra is something I'd recommend to any new transsexual just beginning to transition. I initially got it for two reasons: 1) because I thought it might be a comfortable way of appearing to have a bustline and 2) because back then I couldn't even fill out an A cup bra, and size 38 training bras are hard to come by. I wore it by unhooking the cups from each other and I'd just stick it to whatever I had in that department already.

I liked the Invisi-bra so much I had two pairs of them. I thought this was best because the sticky part grabbed on to lint as well as it did skin, so if you didn't wear it brand new clean and dry every day then it wouldn't be snug, and since you are not supposed to wear a bra over them, I was very interested in having them stick snuggly to my skin.

The night of the bowling party I decided I would wear a pair of jeans and a long sleeved shirt that I'd leave unbuttoned so you could see the satiny black camisole underneath. After so many months of the Invisi-bra performing flawlessly during day after day of office work I had cultivated a false sense of security regarding it's abilities. As a result I didn't even consider that I should wear a bra over them that night. I just stuck the cups on and went to the party otherwise unsupported. That was my big mistake.

The problem is that the bowling alley was crammed packed with other offices have similar drunken bowling parties. Afterall, what better way to celebrate the birth of Jesus* than to go bowling right? The place was hot as it was, and the activity coupled with several bottles of whatever alcohol was placed in front of me made me feel even hotter. My breasts were feeling uncomfortable as they sat under the unbreathing insulation of the Invisi-bra, and they retaliated by becoming sweaty.

It was the seventh frame of the second game when I walked up to take my turn. I don't know how much I had to drink by then, but Patrick had counted for me. When he told me the grand total I was sure he was lying. Whatever the number, I knew I was drunk from the simple reason that my bowling performance had been progressively worse with every frame. When I grabbed a ball from the ball-return and walked on to the lane my mind was not on my Invisi-bra cups, it was completely focused on trying to bowl in a straight line.

My first two balls were not very successful. I was determined to make my last ball count. I took a few steps down the lane and I let my arm arc backwards. As my arm moved, the skin along my chest must have stretched a little and just as I reach the apogee of my swing, the left invisi-cup fell off.

It all seemed to happen in slow motion. I had just begun swinging the ball forward, and could feel the cup making it's way down my side. I had a choice at this moment. I could continue with my shot and follow-through with a natural motion and perhaps knock down some pins, OR I could let go of the ball prematurely and grab my fake boob before it hit the ground. Naturally I chose the second option. I let go of the ball and squeezed my arm against my side to catch the lift before it fell. I remember watching the ball hit the gutter about a metre from the foul line. I took advantage of having my back to everyone and grabbed the cup in my hand and held it at my side and under my shirt, so I could walk off the lane without anyone seeing it.

When I got back to my bench I sat down, grabbed my purse, and discreetly deposited the cup. Suddenly Tara sat down with me to chat. With one boob in place, and the other in my purse I was feeling very lop-sided. I was nervous, but I managed to chat casually for a few minutes even though I knew my next turn was approaching. I was quietly stressing out, I had to do something fast. Luckily Tara was a little drunk too, and I don't think she noticed as I put my purse under my shirt camisole. Then I reached up inside, pulled the other cup free, and let it fall into the purse with it's sister - just in time for me to take my next turn.

That was the day that I vowed bust enhancers like that just were not worth it. An extra cup size is nice, but definately not worth dropping a boob or two in the middle of lane 11.

nice having a couple posts in close order. have missed your blogging. You could reframe these incidents as your trans way of challenging hetro-normativity by tossing off cupsize with ease in grace and ease

Thanks Bran,
I've had quite a few people telling me to get off my butt and blog more. I really do enjoy it, but I guess my life just does not have enough note-worthy events to write about :)

In one way having a life that seems not to be blogworthy is a good thing. No drama, no bs and no annoying peaple that need to be voided from your mind.

I would not tell you to blog more but am always happy to see it when you do.