It was pointed out to me that in all the blog articles I have written about switching genders I didn't ever mention how I chose my new names. I guess I didn't bother to write about it because I've explained to practically everyone I know how I arrived at them - mostly because I think people agree that Sarah Jane would have been a better choice. They aren't wrong. I'll be the first to admit that my first and middle names are kind of awkward together. Too many a's I guess. I sometimes wish that I did pick names with better flow, but then I remember that I didn't pick my names to sound good together. I picked them because they are just both me.

I couldn't even tell you how I picked the name Sarah. I picked it maybe 25 years ago. Even back then I knew I was a girl inside, and at some point I picked out a name for myself. I remember I tossed around a dozen or so possibilites before I settled on 'Sarah', but I just don't recall how I came up with it. Whenever I've often tried to remember, the TV show "Little House on the Prairie" always comes to mind. I've checked though, and there were no actors or regular characters named Sarah. I really have no idea. I think it was just a popular name that I thought was pretty.

My middle name originates in computers and computer games. Back when I was a kid there was a role-playing game called Ultima IV. In the game you play a character travelling in a fantasy land. Along the way you meet several characters that will join you and help you in your quest. One of them was named Jaana, which I always read as "Jan, ah". I didn't think much about it at the time, but I played the game so much that I didn't forget the name even years later. 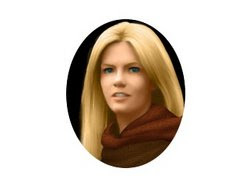 In university I took a first year Astronomy class and was paired up with a woman named Jana-Dee. She was very pretty and smart in her own right, but my favorite part about her was her first name. Well... I liked the first half of her first name anyway, I didn't care much for the -Dee part.

When it was time to change my name I had been calling myself Sarah in my head for 20-some years, and I had been calling myself Jana in computer games for maybe 8 years. I decided that both names were me, and there was no reason I needed to choose between them, so I picked them both. The world sees them as first and middle names, but really they are just two first names that I couldn't decide between.


P.S. Shortly before I changed my name I began playing World of Warcraft where I made two characters: Saraa the mage, and Janaa the priest. Sometimes when people asked how I picked my names I've just taken the short route and said I named myself after my warcraft characters.

P.P.S. I didn't even consider this at all when I was choosing my names, but afterwards I thought it was cool -my mom's name is Sharon Jean. I think Sarah Jana is a good name for the daughter of a Sharon Jean.
Posted by Sarah J M at 10:40 PM

Wow!! I played Ultima too.... It consumed so much time my parents restricted me to how much I played... But that's an interesting story! I guess I'm the only one who didn't know the origin of your name!!!

Really? I guess it is fair that since you didn't know the origin of my name, I don't know your name at all :)

for a very long time, when i was a kid, i hated my names. i knew no one with my first name, and my second name became something to tease me with.

then i grew up and began to think of the origin of the names. my first name is naomi, one of the very strong feminine women in the bible. she was ruth's mother-in-law. the two were widowed (which was nigh on a death sentence back then) and they stuck together - ruth said to naomi, "whither thou goest, so i goest".

my second name is the name of the bulgarian mother goddess sofia (also the name of their capital city). though mine's spelled differently as sophia. i as called "soapy" by my neighbours for years :/.

anyway, i've grown very attached to my names over the years and am glad that 10 year olds can't change their name because i would've picked something common.

you know, to this day, i've still not met another naomi. i've heard of many, people have told me of knowing a naomi or a friend who named their little girl that, but i've never met one.