Sarah is a Momma Again!

As you know, a while back I got a pet. I remember being very unsure if I should or not, and then Megan and Jenn W talked me into it. What started off as a nice lunch turned into them taking me to the pet store where I bought little Babies. I was surprised at how smart he was, and even more surprised at how much personality a bird has. I would spend hours watching his antics and laughing at the weird, random, things he does. It wasn't long before we became best friends. Probably the best thing I have ever done is get a pet bird, so several months later I decided that it just made sense to get another one.

I was cautious about getting another bird though because I live in an apartment, and noise is a concern. I've heard how Babies will reply loudly to other birds he hears outside (or on TV), so I was a little worried that two cockatiels in the same apartment might play off of each other and turn out to be infinitely louder than just one.

Despite my fears about noise, I always thought that Babies' life would be enriched by having another cockatiel around. They are social animals, and although I try to be around as much as I can, it isn't always possible. Even if I am home, I cannot always pay him attention because of work. I decided that I was reluctant to get my first bird and it turned out great, so I should just get over my reluctance to get a second. I found I began checking out pet stores for another little feathery companion.

The pet store I bougt Babies from is Petcetera. I do not like the condition of the cockatiels they have. They have ratty tails, and the birds are antisocial. Their water looks disgusting and the cages are dirty. Some people might think that you should buy your pet from a place that takes better care of them, but whenever I am in that store I find I want to rescue those birds. It was no exception when I was there on the weekend. I visited them on Thursday night, and again on Saturday afternoon.

Saturday afternoon I saw they had the same three birds as on Thursday. They had two friendly looking pearl cockatiels in a cage together, and above them was a small little grey cockatiel sitting on a perch all alone in his cage. The pearls had very frayed and short tails, but otherwise they looked beautiful. They both seemed to be very happy, and they were grooming each other. The grey cockatiel looked angry.

I asked the girl at the cash register how much the pearls were, and she told me. They were $109 each. I told her I wanted to get one. She said she'd be with me in a moment.

I walked back over to the birds and I watched the two pearls grooming each other. I couldn't tell which one was cuter, but I started to feel guilty about splitting up the pair. When the girl showed up she asked which one I wanted, so I picked the bigger one hoping he was male. (I love cockatiels, but I don't want little baby ones running around).

She had a flattened box in her hands and was trying to open it back up and tape it so it could hold a bird. To break the silence I pointed to the grey one in the top cage and said, "Last time I was here there was a sign up saying this guy was already sold."

She incorrectly called him a female and said, "Yeah, she was sold, and then they returned her. She's had it rough. She had a cage buddy for months and then we sold him and she was all alone. Then we sold her and they took her home, got her wings clipped, then brought her back because they didn't want a female. She's been depressed ever since." Then she opened up the bottom cage and said, "Which of these two do you want?"

I just felt bad for this poor grey bird. I found myself saying, "I changed my mind. I want this guy instead." Before I knew it I was at home with my new bird. I named him "Buddies".

I opened the box and tried to release him into the big cage, but he was refusing to leave. Babies looked very interested and came right over. When Buddies finally came out Babies went over and stood next to him, it seemed like they were already best friends.

The first picture of Buddies 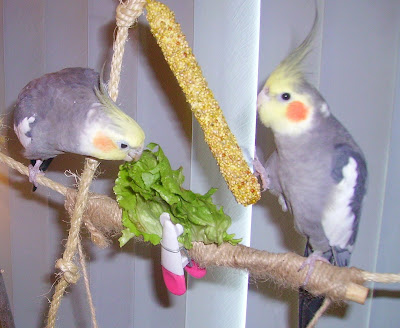 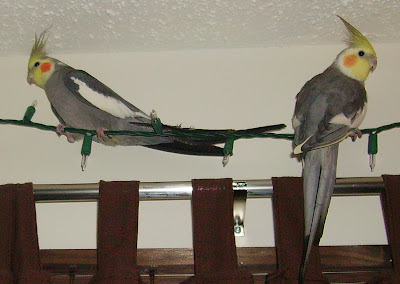 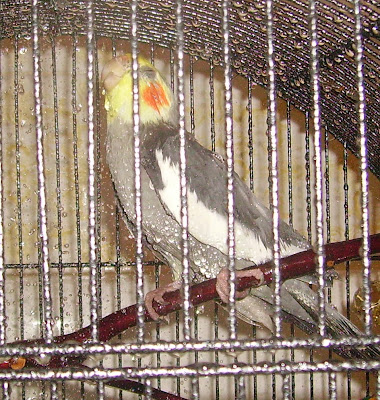 Oh -that was so inspiring.. you took the road less traveled with these birds and probably brightened Buddies' life up forever. So sweet!