Sarah and the Bees

Last weekend I walked to my mom's house. Google maps says it is 9.2 km, but I actually walked a shorter distance because I stuck to side roads and walked through people's yards and houses. Despite my shortcutting, I probably only shaved a couple kilometres off my trip so I knew that by the time I got there, I wouldn't want to walk back. Luckily I had called ahead to see if my mom would drive me home later. She said she would.

I visited with my mom for a while and then we got in her car so she could drive me home. After that big long walk though I really wanted to stop on the way and get a slurpee. To my surprise my mom declined my request on the grounds that I have diabetes, and therefore I shouldn't drink slurpees. I begged and pleaded, and I thought I had won her over as she made a left turn towards the 7-11 instead of a right turn to my place... but as it turns out she just forgot where I lived. A few seconds later, as she was turning around in the 7-11 parking lot I looked out the window and saw slurpee machines just a few metres away, but she still wouldn't stop for me.

I arrived home and drank ice water. I guess it was just as satisfying in terms of a cold drink, but part of my brain kept nagging at me to get a slurpee. It kept nagging at me so bad that the next day after work I had to stop and get one. I got home and sat down to drink it on my balcony futon. I drank about ¾ of it before I set the cup down and forgot about it. For the last few days that cup has been out there on the balcony collecting dust (and other things).

~ ~ ~ ~
Today I went out for another walk and on the way home I picked up another slurpee. I went out to drink it on the balcony and I saw the old cup still sitting where I left it. It wasn't a see-through cup to begin with, but the bottom of it was getting there as the sugary water tried it's best to soak through. I picked it up, but there was no mess underneath. I imagined that was because by now, after several days of evaporating, the contents was more thick gooey syrup than liquid. I carried it into the kitchen and left it on the counter while I went back out to drink my new slurpee and read some Archie comics.

About 45 minutes later I went into the kitchen to throw out both slurpee cups. I took the lid off the old cup so I could dump out what was left over, but I didn't get that far. As soon as I took off the lid about 5 or 6 hornets* flew out of the cup! I think that was the first time in my life that I actually shrieked like a woman.

I've often smiled at my sister Jenn when I see her reaction to a nearby bee. She goes into a temporary panic as she does anything possible to avoid the non-threatening bee. I like it best when she can't see it, and she has no clue where it is, but she ducks, shucks and jives anyway. OK, I know, I sound like a bitch laughing at her fear, but most of the time it isn't even a bee! One time I saw her dive under cover when someone down the block started up their weed-whacker. That behaviour of mine is in the past though. I have re-evaluated how amusing it really is because when I released that cloud of hornets I started flailing my arms like a drowning swimmer. I ran highstepping around the apartment like I was running through tires training for a football game. All the while I was shaking my hair around like a true fan of 80's music. When I was sure no bugs were on me or in my hair I ran outside to my balcony and almost derailed the screen door as I slammed it closed. The irony was not lost on me that I was outside using a screendoor to protect myself from insects that were inside (inside drinking a slurpee no less). I honestly didn't know what I should do. I was out of breath, disheveled and quite distressed about my situation (but part of me snickered as I imagined what might happen if my roommate came home early from work).

I tend to calm down easy though, so I sat down on the futon and read a Betty & Veronica Double Digest for a half hour or so before I quietly snuck back inside. I tip-toed through the apartment like a wabbit-hunting Elmer Fudd and I peeked around the corner into the kitchen. I saw the cup on the counter - but no cloud of hornets was in sight. I reasoned they were either inside the slurpee cup again or they were all waiting, ambush-style, in my room. I took a few steps closer and this time I saw them. They were in the cup alright, and looking pretty smug about it too. I knew I had to do something before they attacked, so I picked up the dome shaped slurpee lid and readied myself to slam it back on the cup. I stopped because the lid has a really big straw hole. I realized an upright slurpee lid is about the same shape as an upside-down hornet's nest so I am sure they were all feeling quite at home in there. Even if they weren't all hopped up on sugar water they could easily fly out through that lid to kill me. 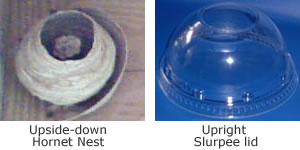 I grabbed a roll of aluminum foil and pulled off a 3 foot strip. I waited until none of the hornets were looking at me and then I slammed the lid down on the cup and covered the straw hole with foil. I flipped the cup over and after I wrapped more foil all around it I jammed it upside-down into the larger cup from today's slurpee. Somehow I did all this with one hand, as I frantically waved my other arm around in the air to shoo away any escapees. I finished by bunching up all the remaining foil into an impenetrable mass in the open end of the new cup. I didn't see any get free, and it looked like the foil prison was secure, but I didn't feel safe yet - I was afraid the hornets could chew their way out. I grabbed a couple plastic safeway bags as additional chew-buffers and tied them both around the package. Only then did I run my makeshift hornet coffin down to the dumpster.

Even now as I write this I still don't feel safe. I didn't actually do a head count at any point. For all I know not all the hornets were in the slurpee cup before I put the lid on it. If there are still some in the apartment I haven't seen them, but maybe that's how they want it. Maybe I am not supposed to see them. Maybe they want me to think they are all gone. That's why I am writing this blog article on my laptop in the living room - because I am worried a few of them escaped, and are maybe in my room...
Waiting for me...
Ambush-style.

lol nice action packed story Sarah.
What is a hornet exactly? is it a wasp or something?