Remember when I used to blog frequently? Lately I have been spending a lot of time on the computer, both at work and at play. When I have some time to kill these days I read books and take long baths (usually at the same time). I had to blog something today though and I couldn't even wait until I was done work. It is something that at best is retroactively mortifying, but at worst could have been one of those memories that fill you with shame and stomach-sinking embarassment for your entire life.

Remember when I mentioned the 'lifts' in my last story? I bought them to help fill out the bustier I wore under my bridesmaid dress. I think everyone has an idea of what a lift might be, but just in case you are not sure; it is an insert that fits inside your bra that helps you fill it out properly. They are funny things because they are meant to be clothes-fitting-aids, but have the potential to be vanity-boosters as well.

When I last wore them the only purpose was to make my clothes fit. It was a happy side-benefit that it made it look like I had larger breasts. Today though... my clothes already fit. I don't know why I pulled them out of the drawer at all, but I am pretty sure I felt that I needed a vanity boost. More accurately I think I just wanted a boob-boost.

I was going to meet Jenna for lunch. Before I left I took a look in the mirror and decided I should throw on a necklace. The one I wanted to wear was nowhere to be seen, so I opened up my dresser drawer that usually contains such missing items. I didn't find the necklace, but I noticed the lifts. I continued my search and found the necklace and put it on. I looked at myself in the mirror and I was satisfied... but then I heard a little voice that said, "C'mon, just put 'em on for a sec..." I knew what the voice was referring to. 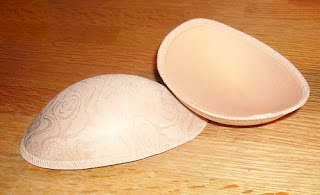 I went back to the drawer, pulled out the lifts and slid them into my bra. The word lift makes it sound like it just lifts your breast up, but really the part that sits under your breast is the thinnest. The padding is significantly thicker around the outside curve. When I put them in my bra I noticed a dramatic improvement in size. Suddenly my A cupped bra was containing enough material better suited to a B. My once innocent looking v-neck t-shirt looked a lot more daring than it did a moment earlier, so I grabbed a thin white shirt and wore it unbuttoned over top. Everything felt tight and deceptively secure, but I liked how it looked.

Despite liking how it looked, I had years ago sworn off any sort of bust enhancement like this*. After checking myself out in the mirror for a second or two I went to take the lifts out, but then I heard a voice say, "Just leav'em in. What's it gonna hurt?" My inner voice has a lazy way of speaking, but for some reason I keep listening to it. A moment later my lifts and I went to meet Jenna for lunch.
~~~

Before I met Jenn I needed to get some money. I pulled in to a drive-thru ATM behind a Windstar minivan being driven by a woman. The van was stopped ten feet back from the machine leaving a big vehicle-sized empty spot at the ATM. I assumed the driver was digging her card out of her purse or something so I spent the next 60 seconds waiting patiently. I still had several minutes before I had to meet Jenn so I wasn't going to be late, but after only another 30 seconds I started to get perturbed.

I began to wonder if I had time to drive around the building and back up to the ATM before this lady found her card, but then suddenly her vehicle began to move in a slow, deliberate manner (emphasis on slow). She was clearly a drive-thru-noob and she made constant course corrections to find a spot between crashing into the building and swinging out beyond arm's length of the buttons. When she stopped moving you could see she opted for maximum safety through maximum distance. I was hoping she had really long arms because she had over a metre between the ATM and her van. She ended up leaning out so far of her window that I could see her husband holding her by the belt so she didn't fall out.

After they got their cash and drove away, it was my turn at the ATM. I don't think this is where it happened, but I can't be sure. I know that I was leaning against the door when I punched in my requests on the ATM, but I think Jenn might have mentioned it if something was wrong, and all throughout lunch she didn't mention my boobs once.

After lunch I stopped at 7-11 to get some gas. I could have knocked something loose there I suppose. I distinctly remember the clerk looking from the cash register to my chest and then to my eyes before he handed me my change. I liked it, it made me feel good. For some reason I felt proud even though I was artificially enhanced. I certainly didn't think that he was checking out my chest for any reason other than normal male behavior, perhaps encouraged by my now larger rack. Thinking back on it though, maybe there was a different reason altogether.

My final stop was downtown to pay my rent. I found a good parking spot just down the block from the property management office and I walked the rest of the way. It was a beautiful day and I felt pretty as I walked down the street. A guy who resembled a leprechaun looked up at me and gave me a twinkly smile. I smiled back. I was in high spirits when I walked into the office building.

The counter top at the accounting desk is quite high, and I usually find myself with my arms folded on the counter, and then I lean on my arms as I look down at the woman counting my money. That too could have pushed a lift out of whack, but if it did I didn't notice it. I chatted for a moment about the weather finally being nice, but from her responses I got the impression that the woman wanted to get rid of me quickly. I just thought she was busy and had work to do, but in hindsight, maybe she just felt uncomfortable because of something she noticed.

About fifteen minutes later I was home. I had enjoyed my time out with the extra volume, but I was eager to get those lifts out because they made my bra too tight. Up until the moment I looked in the mirror I was oblivious to anything being wrong with my appearance. The moment I looked at my reflection my heart sunk into my stomach. I immediately saw what I now imagine both the 7-11 clerk and the woman at the desk had seen as well. One of my lifts had lifted itself right out of my bra and was clearly visible to anyone who cared to look. 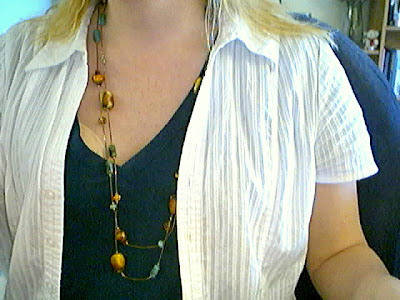 The above is the reason why Sarah's lifts will forever stay in her drawer.

* Later this week I will post the story of why I originally swore off using bust enhancers like lifts
Posted by Sarah J M at 12:15 PM

I think the lift showing thru is kind of sexy....

To me, it just looks like you were wearing a nude coloured bra, and that's what was showing. Which isn't necessarily fantastic, but if it makes you feel better, it doesn't look like a lift?