The Location
I was really impressed with this wedding, especially the location. I told all my friends about it when I got home and I have to say I got some strange reactions. I was saying the wedding was held in the "Cecil Green house at UBC" and everyone thought I was saying "Cecil greenhouse". No, the place was not a greenhouse, it was an amazing house with incredible grounds overlooking the ocean. I can't think of a better place to get married in.

I told Ben that his was the best wedding I'd ever been to.
He replied "I agree!"

The Ceremony & Reception
I didn't really know what was going on for most of the wedding. I haven't been to many weddings, but I knew enough about them to expect a so 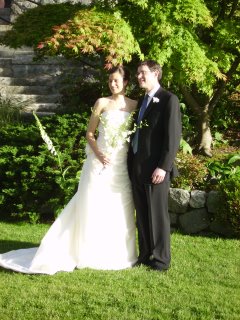 mewhat strict timetable and a carefully arranged seating plan. I was curious to see who Ben thought I should sit with, but I didn't get to find out because despite the suits and dresses people were wearing this turned out to be a very casual wedding. As far as I could tell the only reason Nat walked down the aisle when she did was because that just happened to be when most people were sitting down. I didn't really get to see her walk down the aisle because I was way off to one side, but as you can see from the picture she was beautiful.

This wedding didn't have a religious aspect to it. I was really glad for that because not only am I not religious at all, but I have real trouble with the concept. Even though there wasn't a church and there wasn't a minister, this wedding felt just as ceremonious as any wedding I've been to, and thankfully I didn't feel uncomfortable and like I didn't belong

The Meal
Later on when it came time for the meal the casual arrangement continued. I was sitting at a table chatting with some friends I had made, and behind me the food was brought out. Ben came over and said "you're the closest, go eat!". I turned around to see that I was closest to the food and I instantly felt like I was sitting at the wrong table. I asked if I was, and Ben said that nobody had any specific table. I didn't know if I believed him or not but at his urging I went to get some food. I didn't hear an announcement that dinner was served, so I am not sure, but I think Ben may have personally told everyone to "Go eat!"

The Best Part
After my table and I went up for some food Ben and Nat surprised us by coming to sit at our table for a while. I could tell by the expressions of everyone else at my table that they all felt the same as I did - completely honoured. They sat with us and chatted for a while and then picked up their plates and moved on. I didn't see their every move, but think they probably visited all the tables during the meal. From the tables I did see them visit I saw that same expression on everyone's face of just being really honoured to have them there.

I told Ben that this was the best wedding I'd ever been to, and I meant it. I enjoyed that things were being done just a little different. I shouldn't have been surprised because, well, Ben has always been a little different. I mean that in an entirely good way*. His uniqueness is probably why I wanted to be his friend in the first place. Believe it or not I used to keep a blog almost 20 years ago. It was on an ancient Radio Shack TRS-80 computer. There was no internet, there were only two colours (if you count the black background as one colour), I was the only one that read it, and the word 'blog' hadn't even been invented yet. I guess for those reasons it wasn't a blog at all, it was more like a Doogie Howser journal. Anyway, in one of those entries I had written about my four best friends. When I wrote about Ben I thought that he would be best man at my wedding one day. Well... that isn't going to happen, so I am just glad I got to see him get married. 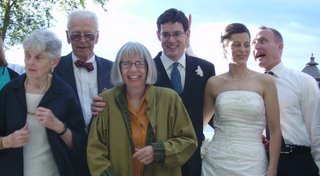 * One reason why Ben is a little different: 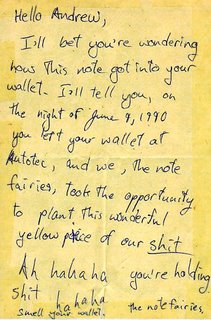 I wonder what will come of being
famous now, - now that we are on the internet and everything.

Thanks again for coming to our wedding.